Austin the Avocado is a green Squishmallow from the Fruit Squad.

Austin loves drawing aliens and dreams of one day living in space! He loves pretending that he lives on the moon or is climbing rock mountains on Mars. Austin became obsessed with outer space in school after reading a book about aliens, will you help Austin plan his next space adventure?

Austin is a dark green avocado with a light green front. His stem and his pit, the large circle on his belly, are both light brown. He has round, black eyes and a smiling red mouth. 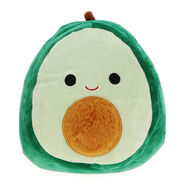 In this version, Austin has a fuzzy pit. 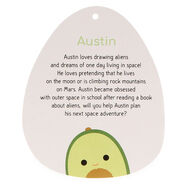 In this version, Austin has blush, shiny eyes and a fuzzy pit. 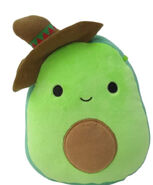 In this version, Austin has a hat and his color changed.
Community content is available under CC-BY-SA unless otherwise noted.