James the Fox is an orange Squishmallow.

James is quite the catch. When he’s not studying for his next math test, you can find him in the outfield, becaue he is the captain of the baseball team. He travels all over the country for sports, and is expected to play in the major leagues!

We have a little secret for you. He’s actually a great dancer! Ever heard of the fox trot? You can catch his moves on the sidelines. When he’s not running the bases, he is planning out his next gourmet creation. You can find James cooking up a pasta dish with his favorite ingredient: parmesan cheese or making his favorite March 28th birthday cake: funfetti!

James is a bright orange fox with large, triangular ears. His belly, the insides of his ears and the markings on his eyes and the sides of his face are all white. He has round black eyes, a triangular nose and two angled whiskers on each cheek. 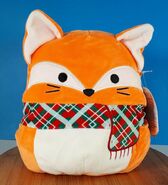 Add a photo to this gallery
Retrieved from "https://squishmallowsquad.fandom.com/wiki/James?oldid=4141"
Community content is available under CC-BY-SA unless otherwise noted.